It's been a while since I've posted anything. You'll happy to know that means I've been working my little writerly fingers to the bone. The Half-Truth is finished and after letting it sit for a few weeks, I just read through it and I'm happy. I hope you will be too. I have a few days of proof reading left and then it will be released into the wild.

Even though I was in the middle of moving house while I was writing it, I have to say that I had fun with this one. Ana lead me down some interesting paths, ones where I had no idea where I was going or what I was doing. Despite being a massively damaged character, she's been fun to spend time with and I think part of me will miss her.

I'm already elbow deep in two other projects. The next book in the Sam Weber Investigations series and another project that I can't talk about right now. So you have lots to look forward too!

And without further ado, I give you the cover for The Half-Truth and the blurb. 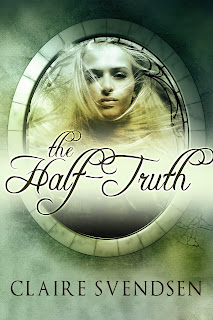 It’s been three months since Ana Turner walked into the lake with stones in her pockets.

Two months since she found out she was pregnant.

And one month since Noah vowed to stand by her side forever.

But Noah doesn't know the baby isn't his and he doesn't know that Julia is controlling him. So when he goes off the deep end, Ana will do whatever she can to find and save him. That is until she sees Mark. She thought she loved him more than life itself but Julia stole him from her. And he’s dead. So how can she be kissing him again?

Inexplicably drawn to the woods she was lost in as a child, she’ll have to make a choice. Believe the lies. Or finally find the truth.

The Half-Truth is the sequel to My Deliberate Mistake and the conclusion of Ana’s story.

Claire Svendsen
Author. If you like dark and twisty things, you should check out my books!